In June 2014 David Cameron spoke about the important role of British values in our education system. How well schools promote such values are now part of the Ofsted inspection process.

The promotion of British values is not something new to our curriculum at Wigton Moor. Such values are at the core of all we do, whether it be through our assemblies, our RE curriculum, our personal, social and health education lessons or through other areas of the curriculum. The term “British Values” can be somewhat misleading as these values are integral to so many countries across the world. 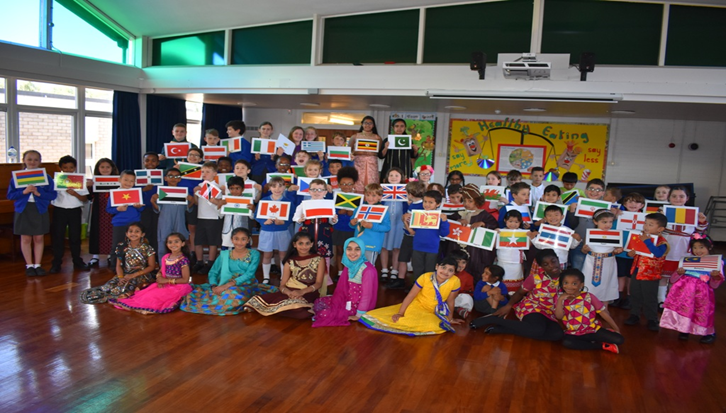 Below are some examples of how British values are promoted in our school curriculum:

Being Part of Britain

Our curriculum reflects, celebrates and teaches children about diversity. For example, in RE children study the four main religions of Christianity, Islam, Judaism and Sikhism in detail, as well as learning about Hinduism, Buddhism and non-religious points of view such as Humanism. They compare and contrast marriage customs and naming ceremony customs, for instance, and have opportunities to visit different places of worship and listen to and learn from visitors to school.

Throughout the year we celebrate being part of Britain. In general terms this means we celebrate events such as Christmas, Harvest, Mothering Sunday, Remembrance Day. We have a trip to the theatre at Christmas and stage several Christmas performances in school. In addition, we always take part in key British events such as the Olympics, Paralympics and the Royal Wedding in 2012, the Diamond Jubilee in 2013 and The Grand Départ in 2014. For such events we hold parades, tea parties, concerts and do additional curriculum classroom work about how such events relate to being British. Every two years we hold a “Wigton’s Got Talent” competition, where all cultures within our school are represented and celebrated.

In Geography children learn about the British Isles, study the city of Leeds and the local village of Shadwell. We run an annual cultural exchange with West Burton Primary School in the Yorkshire Dales. Pupils also learn about Britain's place in Europe as well as other aspects of its rich heritage.

In History children learn about British key figures such as Florence Nightingale, Captain James Cook, Queen Victoria, Mary Seacole, Charles Darwin, Michael Faraday, Dame Evelyn Glennie and Mary Anning. We look at how Britain’s past impacts on our lives today, studying the Stone Age to Iron Age period and life in Saxon/Viking times, discovering what Leeds was like in Victorian times and comparing it to today’s city and finding out about changes in Britain since 1948 including social changes, immigration and the Windrush generation.

Children in school learn about the roots of the democratic process in Ancient Greece, about Parliament in Westminster and about the art of debating, with opportunities to debate current issues themselves.

The annual election and work of our school councils reflect British democracy. We have three school-based councils: School, Equality and Green. Members are voted in by their peers and badge-wearing officers are appointed.

Our School Council is very proactive in having its voice heard. Recent school council activities have included

In addition, the school council organises our charity work throughout the year. This includes fun days such as dressing in yellow or spots for Children In Need and running a mile for Sports Relief. This fostering of a commitment to charities is another way in which we teach a sense of Britishness.

The Green Council works to protect and enhance both our school and the wider environment and highlights sustainability issues. They run “Green Day” in school, taking part in activities such as litter-picking and wearing green to raise money for the charities Water Aid and Friends of Wigton Moor Woods. Members of the Green Council have found out about Waste Week and Switch Off Fortnight and have run assemblies in school to share information about green initiatives.

Children are taught the importance of rules and laws and how the ones in school reflect those in our country. Children are taught the reasons behind rules and that they are there to keep us safe and happy. Each class has its own code of conduct and positive behaviour reinforcements are operated throughout the school. Visits form authority figures in society such as the fire brigade, the local community police officers, doctors, dentists, nurses, MPs and governors demonstrate to children how rules and laws are an integral part of a safe and happy Britain.

Alongside rules and laws we promote freedom of choice and the right to respectfully express our views and beliefs as an integral part of what it is to be British. Children may choose to take part in our very wide range of extracurricular activities. They have a very broad choice of lunchtime play areas and activities. They are involved in their own learning and respond to their learning by feedback systems and self review of marking. They are taught how to use their choices and freedoms safely though our curriculum in areas such as e-safety, anti-bullying, sex and relationship education and drugs awareness education.

Wigton Moor is a wonderfully culturally diverse school with a highly regarded inclusive ethos and practice. We are a microcosm of British society and we celebrate this. Our children are taught and know how to show respect to everyone no matter what our differences may be. We celebrate this diversity in our curriculum. Examples include our celebrations of different religious festivals throughout the year, the participation of all our children, including those with disability, in all our curriculum activities, our annual “One World Week” and the regular staff training we undertake to ensure this inclusive practice remains outstanding.

Behaviours which are contrary to these British values are actively challenged, whether they come from children, parents or staff. Such instances are extremely rare in school and we are proud of the reputation we have in our local community.

The Equality Council, made up of elected pupil representatives, have organised assemblies to promote our Equality Day and recently invited Osei Sankofa from Kick it Out to lead an assembly and workshops for KS2 on equality in sport. The council also designed and made Equality Red Cards to be used to remind peers about behaving without discrimination.

What is the Prevent strategy?

Prevent is a government strategy designed to stop people becoming terrorists or supporting terrorist or extremist causes. The Prevent strategy covers all types of terrorism and extremism, including political, religious and misogynistic extremism. How does the Prevent strategy apply to schools? From July 2015 all schools (as well as other organisations) have a duty to safeguard children from radicalisation and extremism. This means we have a responsibility to protect children from extremist and violent views in the same way we protect them from drugs or gang violence. Importantly, we can provide a safe place for pupils to discuss these issues so they better understand how to protect themselves.

What does this mean in practice?

Many of the things we already do in school to help children become positive, happy members of society also contribute to the Prevent strategy.

• Exploring other cultures and religions and promoting diversity

• Promoting the spiritual, moral, social and cultural development of pupils, as well as British values such as democracy

We will also protect children from the risk of radicalisation, for example by using filters on the internet to make sure they can’t access extremist and terrorist material, or by vetting visitors who come into school to work with pupils (safeguarding procedures). Different schools will carry out the Prevent duty in different ways, depending on the age of the children and the needs of the community.

How does Prevent relate to British values? Schools have been required to promote British values since 2014, and this will continue to be part of our response to the Prevent strategy.

• The rule of law

• Tolerance of different faiths and beliefs

Isn’t my child too young to learn about extremism? The Prevent strategy is not just about discussing extremism itself, which may not be appropriate for younger children. It is also about teaching children values such as tolerance and mutual respect. We will make sure any discussions are suitable for the age and maturity of the children involved.

Is extremism really a risk in our area? Extremism can take many forms, including political, religious and misogynistic extremism. We will give children the skills to protect them from any extremist views they may encounter, now or later in their lives.

Extremism – vocal or active opposition to fundamental British values such as democracy, the rule of law and tolerance of different faiths and beliefs

Ideology – a set of beliefs

Terrorism – a violent action against people or property, designed to create fear and advance a political, religious or ideological cause

Where to go for more information:

Please contact school if you have any questions or concerns about the Prevent strategy and what it means for your child. You will find more details about radicalisation in our safeguarding policy, available on this website. We also have information about spiritual, moral, social and cultural development and British values.